Synthetic Vitalist Results with the ELBVHT.

In our last issue (HQN 11:6), I presented a number of distinct analytic tests of Vitalist humor using the ELBVHT (Expanded Langer/Bergson Vitalist Humor Test).  In this issue, I would like to consider synthetic measures possible with the ELBVHT, measures which combine two forms of Vitalist humor.

Synthetic Vitalist questions focus on what we at ITCHS consider six humor personalities, each the combination of two of the four analytic forms of Vitalism (Tenacity, Potential, Creativity, and Performance).  Since Vitalism as we have studied it consists of two voices, Langerian and Bergsonian, there are actually twelve humor personalities involved.  Consistent with ITCHS humor-of-the-mind studies, the six Langerian personalities form a circle and so do the Bergsonian.  A fuller discussion of the principles guiding our description of the Langerian circle can be found as far back as HQN 5.3.We have not changed that Langerian circle in order or in rubrics assigned to each of the personalities since we began our testing program with the LBVHT. 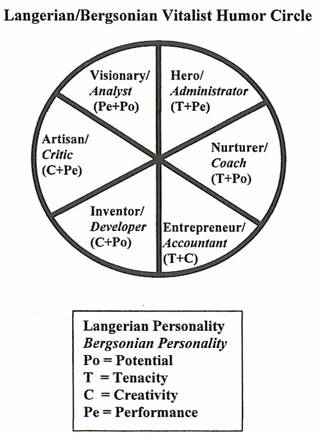 In the original LBVHT (Part I of the ELBVHT), participants chose between a Langerian and a Bergsonian of the same type (for example, Potential), making Langerian and Bergsonian scores mirror-images of one another.  Thus, mathematically, in the LBVHT, to assign someone the Langerian rubric Hero is identical to assigning the Bergsonian rubric Developer.  This tautology seemed at best oversimplified and became the motivation to expand the LBVHT with a Part II that would allow Langerian and Bergsonian personalities to be independently assigned.  A second advantage to the ELBVHT is simply that it is twice as long.  We at ITCHS are convinced that humor is so complicated and various that longer tests are much more likely to give insight into humor’s relationship to the rest of the world.

We always emphasize that the rubrics are matters of theoretical analogy.  We have done our very best to provide accurate sets of rubrics for both the Bergsonian and Langerian circles, and in the case of the Langerian circle, we have reported many high- and very-high-confidence results which seem to confirm personality rubrics around the Langerian circle. But ultimately, the rubrics are theoretical constructs applied to actual data from our very many associate-respondents.  That data is the real truth, perhaps made more understandable by appropriate rubrics.

Quick review of analytic results from the Care Providers Experiment

In November 2009, Robin Jaeckle Grawe, Chaplain Bill Flesch, and I presented at the annual convention of Care Providers in Minneapolis, MN.  The data set we were able to construct at that time includes 95 respondents to the ELBVHT, to a humor attitudes questionnaire, to queries of gender and decadal age, and to two side tests, one of Projected Retirement Hobbies and one of favorite Christmas Special Movies.

1)      the group as a whole scored slightly to the Bergsonian side on a Bergson-Langer Vitalist Index, with men slightly more Langerian than female respondents;

2)      Movie favorites could be related to Langerian sub-form scores, specifically Langerian Creativity was related to Mary Poppins and negatively related to Sound of Music, which could be shown with very high confidence;

3)       Three projected retirement hobbies—Grandchildren, Walking, and Travel—could be fashioned into an index, and  those scoring a  0 (chose none) on that index were much more likely to be Langerian than Bergsonian in their Creativity score, p<.004.

Constructing Synthetic Personalities and Establishing Correlations to Them

When we add T+ and C+ together, that sum is correlated negatively with the constructed hobby index.  For combined T+,C+ scores less than 5.9, 34 respondents scored greater than 0 on the GWT hobbies and 0 scored 0 on the hobbies. In contrast, of those scoring above 5.9, that is those with higher Entrepreneur personalities, 49 scored greater than 0 on the GWT while 8 scored 0.  Thus all those who chose none of the GWT hobbies also were high in Entrepreneur score.

With better than 14% of higher Entrepreneur scores also choosing none of the index hobbies, a Difference in Proportion Test measures z  = 2.288, p<.023.

I have already commented on the relationship between the GWT index constituents and Langerian Creativity.

Let us then consider Tenacity in relationship to Grandchildren, Walking, and Travel.

A good number of those who chose Grandchildren as a projected hobby could hardly have any grandchildren themselves since they were less than forty years old.  Perhaps this goes with a concept of “enjoying” grandchildren—in other words of letting them and their parents do the work, with grandparents as spectators.  In that case, it is perhaps a non-tenacious choice.  Similarly Travel perhaps is a vision of becoming a consumer of experience provided by others and similarly susceptible to interpretation as a non-tenacious choice.  Walking—well everyone thinks they should exercise, and walking may be a lowest common denominator no matter how much its health benefits are self-evident in every generation.  Many other forms of exercise from aerobics to mountain climbing may easily be presented as more tenacious in this light.

Moving on, what about the combination of C+ and T+.  Again, our carefully-chosen rubric for this combination is Entrepreneur.  Entrepreneurs to be successful must be creative but they also must put their creativity to work and keep it working until it succeeds; in other words, they also need to be tenacious.

Active entrepreneurial impetus, we posit, is at least like a humorous appreciation for joying in the extraordinarily alive in tenacity and in creativity.

If we consider Grandchildren, Walking, and Travel as anti-entrepreneurial, the argument seems only nuanced from what we’ve said for Tenacity and Creativity separately.  It doesn’t take an entrepreneurial spirit to be a traveler.  Entrepreneurs serve others to prosper themselves or their causes.  Travelers in one form or another tend to be consumers and spectators of others’ realities.  Perhaps enjoying Grandchildren can be similarly characterized.  And enjoying Walking seems no entrepreneurial toward good health:  walk around the lake, and you’ve gone nowhere.

(Please don’t take these as jaundiced personal comments.  The author has always made walking his major exercise, enjoys having five grandchildren, and planned travel every year for vacation.  All these hobbies are superlative in some areas, but evidently not in Langerian Tenacity and Creativity, at least for respondents like those at Care Providers.)

Some Comparison Results for Perspective

a higher proportion of High-Choice of Grandchildren, Walking and Travel leaned away from Entrepreneur high scores (leaned more toward the Accountant side of the Entrepreneur-Accountant dichotomy.).  Just the reverse is the case for Physical Activity, Volunteering and Gardening, admittedly with much lower confidence: a higher proportion of High-Choice of Physical Fitness, Volunteering, and Gardening went with Entrepreneur scores.

If it is possible to add C+  to T+ to form Entrepreneur, it is also obviously mathematically possible to subtract one analytic from the other, for example T+ minus C+.  We worked at ITCHS’ predecessor with such correlates in the prototype version of the Humor Quotient Test (HQT) which is the precursor of the LBVHT.  We have occasionally discussed such measures since, calling them “axes,” as in the Langerian T-C Axis.

Being a gardener myself, let me suggest that this result does not particularly indicate an appreciation for gardening as a unique expression of self in deciding what kind of garden to have and what kinds of work to do in it which might suggest creativity.  It suggests instead an idea of gardening as making things grow and confronting the continual challenges to all growing things, a tenacious approach to keep things living and growing.  Perhaps analogous distinctions could be made for approaches to Physical Fitness and to Volunteering, distinctions between a basically tenacious approach and a basically creative approach to such hobbies.

Synthetic combinations of Langerian sub-forms are here demonstrated to have the potential to produce high- and very-high-confidence results concerning groups’ approaches to human activities like Projected Retirement Hobbies.  Sophisticated use of the ELBVHT can objectively examine an industry’s attitudes from many related but distinct, objective directions toward a highly nuanced, composite understanding.