If the classical humor admired by George Meredith is aptly called Humor of the Mind, vitalist humor, first described by Henri Bergson and later recast by Susanne Langer, can be called Humor of the Spirit.  As an expression of the élan vital, vitalist humor is a response of the human spirit to the forces of life and death. (See HQN Vol. 3 No. 4.)  As such it might be expected to reveal differing sensibilities among different religious groups.

As has been noted earlier, vitalist humor comes in two voices, defiant or Bergsonian, which laughs in defiance of death, and affirmational or Langerian, which laughs in affirmation of life. It is not hard to find theatre or cartoon examples of Bergsonian humor created by the “mechanical encrusted upon the living”; the Langerian sense of laughter at life breaking forth

can be seen in our response to babies and puppies or in the sports bar laughter over a spectacular play.

Working with the two voices of vitalism, Paul Grawe developed the Vitalist Humor Test (VHT) which employs four forms of vitalist humor—Potential, Creativity, Performance, and Tenacity—seeking the participant’s preference for the Langerian or the Bergsonian form of each. The VHT measures the degree of preference for the affirmational or the defiant voice for each type of vitalist joke.  For example, participants are shown two vitalist creativity jokes, one which asks us to laugh at a lack of creativity—perhaps an idée fixe (defiant vitalism) and one which asks us to laugh with  creativity—perhaps a brilliant idea (affirmational vitalism).  Or one joke will ask us to laugh at poor performance or lack of performance while its opposite will ask us to laugh with extraordinary performance. 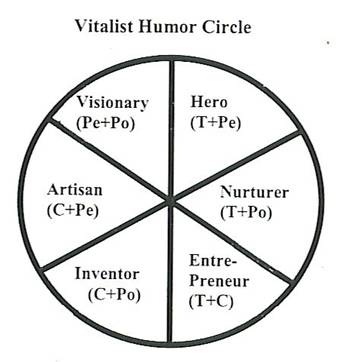 The VHT was administered to five congregational subgroups, two Catholic (one of which was connected to a university), two Lutheran, and one evangelical; additionally the test was administered to a group of Winona State University faculty who did not specifically identify church affiliation.  The researchers are much indebted to these groups for their participation.  The chart below gives a fuller description of the Vitalist Participant Subgroups.  The total number of participants was 145.

Redeemer Lutheran Church (RL): sampled at a Bible study and a church Board meeting, primarily Missouri Synod Lutheran, over 45, a mix of professional, working class, and elderly needy

Winona State University (WSU):  sampled at an on-campus critical thinking conference, secular in institution, not of liturgical tradition, in 40’s and 50’s, university faculty, of both genders

Before looking at the distribution of vitalist humor personalities among the congregational groups, it should be noted that overall participants preferred defiant vitalism to affirmational vitalism.  This result does not come as a surprise in that many people have difficulty recognizing affirmational vitalism as laughable or as humorous.  Yet theoretically the relative rarity of affirmational vitalism makes it the more appropriate test of personality definition.  A person is defined more by where he or she joys in the presence of life than by where he or she laughs at the ever-present forces of death.  The following charts show the distribution of vitalist humor personality types by subgroup.

The most common personality type among all participants was Artisan with 34, followed by Entrepreneur with 28 and Inventor with 10.  These results reflect the stronger preferences among all subgroups for Langerian creativity than for other Langerian forms and the average preference for Bergsonian vitalism among all other joke types.

It should be noted that participants were not merely associated with a congregation or subgroup; they might be associated with a cluster of subgroups, such as liturgical churches, Catholics, Protestants, or academics.  Additionally, we have repeatedly found that gender affects participants’ humor preferences, and thus it is often necessary to separate genders to find a meaningful result.

I.   While all subgroups showed a strong liking for Langerian Creativity, Faith Free females were exclusively Artisan except for the 2 ties, a relatively low number. Faith Free participants as a whole scored more highly Artisan than other participants, p < .09.  Evangelical Protestantism starting in the 16th Century with English Puritans and French Huguenots tended to thrive among the artisan class.

II.                All SMU participants were of the Christian Brothers Order (and thus male), an order well-known for it entrepreneurial spirit in establishing universities and wineries at its California missions.  They tested high for Entrepreneur.

III.                Redeemer Lutheran is known for experimentation and inventiveness in worship, using a wide variety of music, and in ministries, including a stewardship garden, which was featured in a national Lutheran magazine.  It tested high for Inventor.

IV.  With a total of  only 7 Nurturers overall, 6 were Lutheran females.

The extraordinarily high confidence levels of these results suggest that in fact vitalist humor preferences are reflective of religious group sensibilities.